The annual Layne Staley Tribute has become a tradition for many, with fans making their journey to the Pacific Northwest from all over the world. The dedication from Seattle’s ever-growing music community toward preserving its legacy never fails to amaze me, and that very reason keeps me coming back from the U.K each year.

The Showbox is an iconic building, with a diverse list of artists having performed there since its foundation in 1939; from Jazz icon Nat King Cole to ‘grunge’ pioneers Soundgarden and every genre in-between. Recently, talk of demolishing the venue to make way for high-rise apartments made for heated debate, with local musicians and supporters rallying around to save its fate. Holding the 17th Layne Staley Benefit here this year would be somewhat bittersweet, as the fight to #savetheshowbox continues.

My first time experiencing the Emerald City dates to 2007, but my initial contact with the Layne Staley Fund extends back to 2003 when I reached out to Nancy (Layne’s mother) in the hopes of helping from afar. I consider myself relatively late to the Alice in Chains party, having only discovered their work a little after Layne passed.

Thinking about that trip brings back fond memories, with me scrambling to buy a super-durable suitcase to protect the four-piece portrait painting I was working on, and gifting it to Nancy at what was known as the Fenix (now Showbox SoDo). Thankfully, legendary rock photographer Mike Savoia was on hand to capture the moment backstage.

After last year’s incredible performance at the Moore Theatre, and having had such a great ‘night at the Off Ramp’, I was ready to rock. Hosting this celebration would see local talent Jar of Flies, with Rane Stone on lead vocals, accompanied by J.T. Philips & Kyyle Cort on guitar/vocals, Lee Bruso on bass/vocals, and Daryl Williams on drums, perform music from the collective Alice in Chains and Mad Season catalogue. Working tirelessly to assemble a thorough setlist and deliver material you would’ve never heard AiC play live, we were treated to 30 songs across 3 hours, 4 albums, 2 EP’s and 2 tuning changes no less!

I arrived before doors opened to arrange prints of my artwork at the merch booth. Greeted by Marci and Kenneth Garrett who I’d met at the Mariners Alice in Chains listening party, my gratitude goes to them for their relentless effort across both events. They made the move to Seattle from the East Coast a year ago, drawn here by their love of music. Maybe I’ll find the courage to join them one day! It was also an honour to have my Chris Cornell piece displayed amongst the vivid merchandise designed by Cain Hollowbone for a second year running, and pastel portraiture by gifted Washington artist Michelle Filmer.

The Showbox’s character is apparent as soon as you walk through to the main floor, with its deep red lighting, smoky haze, and deco-design setting this evenings scene. I spent time catching up with friends and was delighted to see Paul Hernandez and Julie Baroh attend their first tribute. Having just visited the newly launched ‘Star Gazing’ exhibit at Seattle Mainframe, it was clear how much of a cathartic experience this had been to organise. Before I knew it, a sea of people had gathered and the first half was about to begin.

‘Bleed the Freak’ opened, with its eerie intro and Rane’s bellowing vocals kicking this trip down memory lane off to a perfect start. Facelift was well underway as ‘It Ain’t Like That’ and ‘Sea of Sorrow’ followed suit. A quick album shift to ‘Angry Chair’ and back to classics ‘Man in the Box’ and ‘Love Hate Love’ lead to Mad Season favourites ‘Lifeless Dead’ and ‘I Don’t Know Anything’.

I was immediately struck by the quality of sound filling the air, and Rane had remarked how impressed he was with the technician, thanking him mid-way through. It’s as though someone hit rewind and the 90’s were calling. You could just feel ‘it’.

Layne was an incredibly powerful singer, with Barrett Martin remarking how you could hear his voice above the monitors, emanating from his body. He resonated this incredible force with such natural ability, it’s no easy feat to project the emotion of Alice in Chains’ music.

The setlist meandered through EP’s ‘Jar of Flies’, ‘Sap’, and an acoustic performance ending with ‘River of Deceit’. I was absorbed, glancing over to see others equally caught in the moment.

I did face an internal dilemma, as Alice in Chains announced a last minute ‘secret’ show at the Crocodile which aligned with the tribute. Entry in hand, I popped over for the start of what would be a short set in promotion of their new album, Rainier Fog. After three songs, the yearn to be celebrating with my friends took hold, so off I ‘Ubered’ back to 1st Ave.

Fortunately, this coincided with a short break but sadly meant missing Nancy sing ‘Wake Up’ alongside Layne’s recording. Graceful as always, I’d seen Nancy take the stage before, performing what must be the most hauntingly beautiful song I’ve ever heard. So candid, Layne certainly bares his soul on Mad Season’s 1995 album, ‘Above’. It’s difficult to hold back the tears during this precious mother, son collaboration. 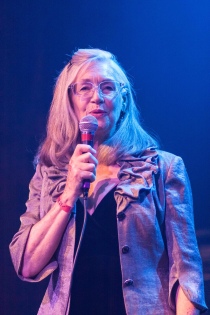 As the second half commenced, Daryl’s brother, Joe Butterfield joined Jar of Flies on stage for a seven-song medley before the evening drew to a close. Ending with ‘Down in a Hole’, ‘Again’ and lastly, the perfectly harmonised ‘Don’t Follow’.

There is a great difference between playing music by another artist and being able to portray the conviction it was composed with. Jar of Flies have consistently delivered an unparalleled Alice in Chains experience since they first appeared at the 2007 benefit as a trio. Last year, Kyyle stepped in to fill ‘Jerry’s’ shoes after longstanding member Shannon Sharp relocated to Texas, and they’ve continued as a formidable group. 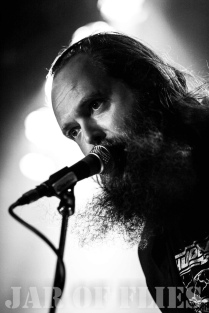 J.T. Philips and Jar of Flies for your continued devotion to organising and performing at this event.

Nancy Layne McCallum for always taking care of and making time for fans. Your courage has always inspired me.

Cindy Cavins for her persistence in recruiting me. It’s a pleasure to be a member of the NeHi Stripes team.

I leave with my heart full. Until next year, Seattle…