I didn’t see Layne again for a couple months. I think it was December of 1987 and me and my friend Shelley were at a house party. Layne and Jerry were there. As me and Shelley were talking, Layne came over and addressed us by saying “You are the two blondes of the party!” He ended his statement with a short laugh. Then he sat down next to me and said “My friend says he’s dating you and says he’s going to date you for a long time.” He said it in a very teasing way. I answered by saying “Oh, really, and how do you know that?” I used a teasing voice back at him. A
He told me Jerry was friends with the guy I was dating and was talking about me. I had only been on two dates with this guy. His name was Ken from a band called Sexx. 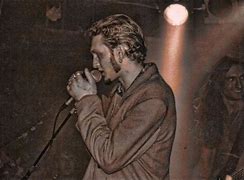 Anyway, for whatever reason, maybe because we were both drinking, we actually talked nonstop for quite a long time! It was so weird to sit there with him and have it not be awkward. Granted, it was a pretty crowded party and it wasn’t just me and Layne in a quiet room or his car…plus we were not on a date so no pressure.

After awhile Jerry came over to Layne and said they had to go to another party. Layne invited me to go but I was with my friend and we both had to work the next day.

I walked outside with Layne though and suddenly he kissed me. We ended up kissing for about 5 minutes with Jerry several yards away telling Layne they really had to get going…plus my friend was standing around waiting for me. At that point Layne asked me to call him the next day at the Music Bank. Then we said goodnight.

I did call him the next day but while we were talking Jerry was in the background telling Layne to get off the phone because they needed to practice. Layne tried to explain to Jerry who he was talking to but he was insistent that the needed to practice. There was just something about Jerry that I found intimidating. Something about his aura. I told Layne it was fine and I let him go. I never called him back…nor did he call me.

Sometime in late 1988 James called and invited me to see him and Nick’s new band called The Society. They were going to be playing a show with Diamond Lie. So I went. After the show I was sitting at a table with my current boyfriend, James, Nick, Mike Starr, and Layne. Layne and I gave each other hug and made small talk but it was awkward like the old days. Layne’s hair was more curly than it had been and had grown a goatee. I remember not being a huge fan of it at the time. Hehe!

Also in late 1988, I had a friend call and told me Layne was on TV. It turned out to be the King 5 documentary that is on the Music Bank box set. I watched the second airing of it later that night. My only thoughts were, “Damn, that apartment is messy!” …and “they are never gonna make it big!” LOL!

To watch that documentary now really hurts. The scenes inside the Music Bank make me want to go back and have a do over. Why did we not take more pics of the inside of the place? Why did we take everything and everyone for granted?

In 1991, I had MTV as background noise on my t.v.; suddenly I heard something familiar and looked at the TV and my jaw dropped! It was the “Man in the Box” video. I was like “Holy Shit! They did it! OMG! OMG! Freaking Layne is on MTV!” I was so excited for Layne! I called my sister and she was freaking out too!

I ended up seeing the show in Tacoma when they opened up for Van Halen in 1991. I made my way up front but then quickly stepped back. They were spitting all over the stage and I got sprayed and was grossed out! Haha!

So fast forward to 1994. James Bergstrom tracked me down and invited me to a show in Auburn, WA. The band was called FTA (funding the album). They played cover songs. The band included James Bergstom, Johnny Bacolas, and Travis Bracht. They were great. James also told me he and Johnny were in another band called Second Coming with singer Jesse Holt (Maxi). I started going to their shows as well.

In July 1994 James told me Layne was going to be at Second Coming’s CD release party and that I should go. They had recorded a song called “Its Coming After” with Layne and he was going to perform it there.

I went to the show with my sisters. I can’t remember if it was before or after the show but Barb spotted Layne and went up to him and said, “Christy’s here!” She told me later than Layne spun around and started looking for me and said “She is? Where?” He spotted me and I walked over to him. We hugged and talked for a bit. Me and my sisters also got our picture taken with Layne that night but the person who took it cut Layne’s head off! Duh! It was not the last time I saw him, but it was the last time I ever talked to Layne.

The rest of 1994 I saw all the Second Coming shows. Layne came out and performed “It’s Coming After” a handful of times.

The last time I saw him live was January 31, 1994, New Years Eve. The lineup was Hot Saki, Second Coming, and Mad Season.