NeHi Stripes Musiczine Seattle started in May 2017. But the idea came about 1 year earlier.

NeHi Stripes exists because it’s a way to give back. The bands and solo musicians work very hard to bring us the best from the Northwest. Therefore, we cover shows, write reviews and tell our stories as a way to thank the bands, but also to share with those that were not able to make a show. We do not make any money doing this, it’s strictly donated time and money. We have provided a donation tab which will help us update our website, but also cover the cost of the yearly website fees, and promotional items.

Below are some pictures we’ve taken since our inception; and it’s going very well.

Who we are; dedicated people who love good LOCAL music, while also supporting the music scene enough to start a website and donate our free time to write about it!

Cindy C. –  used to write for a different music website. That site was specifically called a “click -bait” site. After three years of writing her own articles, it was time for her to start a website, solely based on the Seattle music we like; specifically rock and metal. It’s important for anyone that reads this that they know all of our articles are written by us. They are not written by authors on other websites. We found out that a clickbait site often takes other writers articles, then change a few words to make it his/her own. Then they insert a hyperlink to the original article they took the story from in the first place. That is a BIG NO for us. We write everything from start to finish; which includes taking our own photos, and videos (unless otherwise noted in the article). CMarie is the founder, website administrator, editor and also a writer. She focuses on the bigger projects that take longer to research and write. 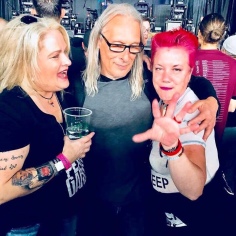 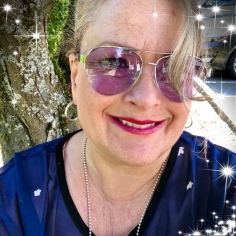 NWMusicPhotos (Kurt Clark) – is a longtime friend of Cindy’s and is well-known in the Seattle Music Community; specifically photographing bands.  When Kurt is not covering a show, you can find him rocking out somewhere in the NW enjoying the music. Kurt is also an excellent writer. Kurt is married and has two sons. Kurt has many hobbies too, one of which is photographing with “film” cameras. He enjoys taking photos of his son’s rollerskating too. With several years of photographing bands under his belt, Kurt has earned respect and has a solid reputation.

Nina Rose Barber – Nina lives in the United Kingdom and without a doubt, loves Seattle. More specifically………the Seattle grunge era! Cindy met Nina at the annual Layne Staley Tribute a few years ago. Each year they got to know one another a little better. When Cindy started thinking about bringing Nina on as a writer, she went to someone that knew her better. That person was Klover Jane, Years of War and Jar of Flies singer, Rane Stone. He had known Nina much longer. Rane has known Nina much longer and it didn’t take him but a quick second to give her a glowing recommendation, simply by saying “she’s a brilliant writer”. Nina later confided that she used to write Rane actual letters; therefore, Rane DID know what he was talking about. that recommendation did not surprise anyone. PLUS Nina was a Layne Staley fan, and anyone who loves Layne has got something good going on in their lives. Nina is also a car lover and an accomplished artist.

Jason “Wardy” Ward – “Wardy” is an Australian and has a deep love for all things grunge, garage and punk rock since his early teens. Even though he dabbled with drumming in his teens and twenties, a musician he was never going to be. He found his musical passion in radio and has been hosting a radio show around grunge acts from the ‘80s to present day. He’s amazed at how many new bands are making the noises we know and love. And still wiith the classic bands making the rounds and releasing new stuff. It just proves the music we fell in love with nearly 40 years ago is still alive and relevant.
Along with his passion for music, Wardy loves chrome bumper cars from the 1970s; which led to him becoming the newsletter editor and story writer for Street Machine Magazine and drove a passion to write.
Wardy feels quite fortunate that his radio show has brought many ‘rock n roll’ friends from around the world. From producers to sound guys to band members, both young and old. This affords many chances to sit down with, chat and interview such great people. These are the stories that Wardy plans to bring us on a regular basis. 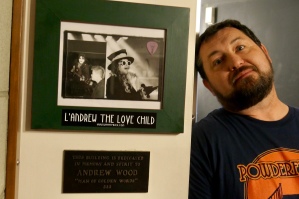 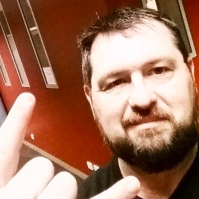 Pictures of Wardy (far left and middle), and with Jack Endino (far right).

For any bands that want their shows photographed, please email Kurt Clark at        NeHiStripes-Photo@MetalFan.com.

If you’d like us to come to a show, please email us at NeHiStripes@MetalFan.com. Please understand that we will need to listen to your music first before we commit. We would never cover or review a show unless we like it. We do not write reviews for anyone unless we think there’s potential or we absolutely LOVE it!! Currently we are covering “sets” at shows. We are short on writers, so we are unable to committ to covering an entire show, unless it is arranged well in advance.

We’ve been fortunate to be welcomed by the Seattle bands, musicians and commnity and have been encouraged to continue with this path. We are still very young and have a long way to go. We welcome you to subscribe to get notfications for new articles on our homepage. Please join us on this music journey. It should be quite the ride.

Thanks for checking this page out; please take the next step and read one of our features, or reviews.