This past Friday was July 20th, and for most people it was just another day. However, for fans of the late, great Chris Cornell, it was another day; it would have been the 54th birthday of the legendary Seattle rock icon. Though it’s been over a year since Cornell’s passing, his memory and passionate music still lives strong in Seattle.  On this night, the Seattle music scene celebrated his birthday the best way possible, filling the air of The Crocodile with music!

Local favorites, and Soundgarden and Temple Of The Dog tribute band,  Outshined were set to headline the evening.  The club filled fast with a mix of people from every age group. All of these people had one thing in common, a love of Chris Cornell and his music.

Kicking off the night was local rock band Blue Helix, a four-piece band from the Puyallup, WA.  Playing a list of their originals, including the anti-bullying song, “Anti-Social Butterfly”, off their second album of the same name, got the crowd warmed up and prepped for an evening of great music. Their set was full of energy and melody that drove straight through your heart. Midway through their set, lead singer Sami Chohfi talked about how the music of the grunge era influenced him. With Arman Briang on lead guitar, Wolf on bass, and Marco Bicca on the drums they cranked through a set that was chock full of energy from the first strum of the guitar, right up to their rendition of Cornell’s “The Promise”.

In an interview with lead singer, Chohfi, after their set, he talked about the first song he heard from Soundgarden that cemented them in his heart as not only an influence, but also as a favorite group, “…the first song I heard from them was ‘Black Hole Sun’, but my favorite song of Soundgarden’s growing up was always ‘Zero Chance’ off the Down On The Upside album.”  When asked “How did the music of Cornell shape and mold your life and your style of music?”, Chohfi responded, “ I learned song structure and how to write music by learning songs of the bands I looked up to.  So, Chris influenced me in that regards, but mainly with his vocals.”  He went on by talking about Cornell’s style “…I always thought that he had every element that a singer should have.  He had the sensual voice, the low sexy voice.  He had all the range from the low end to the high end.  But most of all he sang with emotion with vibrato.  He had every element that I felt that a singer should have.  It inspired me to learn how to sing, and to be a better song writer.”  He ended the interview by saying, “… this was an awesome night.  I had so much fun.  I enjoyed every minute of tonight”. 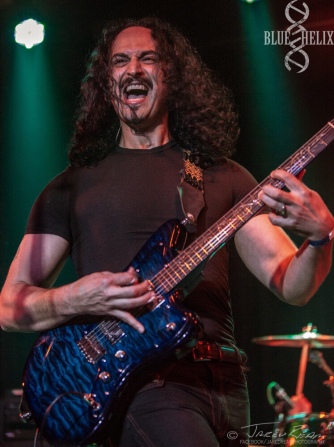 The headlining band, and the power punch ending, was Outshined a 5 piece super group tribute band made up of players from the bands: Klover Jane, Superfekta, Beltfed Weapon, and Dead Rebel Saints.   With JT Phillips on lead guitar, Kyyle Cort on rhythm guitar, Lee Bruso on bass, Daryl Williams on drums, and the shredding vocals of Kevin James Hoffman on vocals, they rocked the night!  Hoffman’s vocals matched Cornell’s almost note for note.  They played songs from both bands entire discography, as well as bringing in a few gems from Audioslave, for over 3 hours.  On songs including “Cochise” and “Hunger Strike”, Hoffman’s coverage of Cornell’s dynamic range was spot on; from the proper placement and usage of vibrato in “Burden In My Hand”; to the almost angry growl in the vocal tones in the song “Cochise”.  Putting the emphatic jolt into the night was the energetic playing of JT Phillips. With his note for note matching of every song on the guitar, couldn’t help but imagine yourself listening to guitarist Kim Thayil of Soundgarden.  Many people in the audience were seen with their eyes closed, tears running down their cheeks, as they listened.  One person said, “I could feel the spirit of Chris through Kevin, it reminded me of when I watched Chris before he got super popular”.  Songs like “I Am The Highway” had the entire audience singing along.  During that song alone, you could feel the true soul of music in Seattle.  Not many words were spoken between songs, because that night, it was about nothing more that the music of Chris Cornell.  No words needed to be spoken… you only had to feel the love from the music.

When talking to Phillips about the organization of this show, he said “We’ve done this tribute band since 2008, since before they got back together.  And I remember the morning that IT happened; my fiancé woke me up and told me, I couldn’t believe it.  I mean I laid back down and just cried.  That was the voice that was supposed to sing me into my gray years.  That should have been a story”.  He went on to say, “…last year we just happened to have a show a couple of days after he passed.  I mean what are we going to do? we’re going to play it.  It was at the High Dive, it was a beautiful night.  People were singing along and crying. So in that way, we wanted to continue to honor him.  We wanted to continue honoring it hopefully for the right reasons.  To bring people together to remember when you heard it the first time.  To remember whatever memory it strikes for you.  That’s the goal.  That’s what we want to have, and doing it tonight on his birthday was a planned choice.  We saw in the days after the show last year how much it meant to people.  So, doing it again, and this time on his birthday seemed like a great choice”.  He went on to explain “…a good portion of the proceeds from ticket sales will be donated to the Chris and Vicky Cornell Foundation.  And also just to let the fans have a spot to come listen to the music live. To make it happen.  That…. that is what it’s all about for us”.  When asked about the first Soundgarden song he ever heard, Phillips said “… I don’t have any memory of any particular song as much as holding the Superunknown CD and thinking…  ‘I don’t know about this.’  You have to remember I grew up in a small town in Idaho and didn’t get MTV until the turn of the grunge movement.  It wasn’t until a cousin of mine that lived here in Seattle said ‘You wanna play good music, you need to learn this.” And that’s what he did during this show, to a “T”, nailing each chord and note, as if he had written them himself.

The night ended with a beautiful rendition of “Slaves and Bulldozers”, performed in front of a packed house of people whose hearts were over flowing with love for the music and the talent of Chris Cornell; A singer who will be forever in the hearts and minds of grunge music lovers around the world, and especially in the city that knew him best.

We miss you Chris.