It takes a lot of work to be notorious!

In the last forty years, it would be difficult to describe a band more deserving of that description than Motley Crue. For me as a teen in the early 1980s, Motley Crue exemplified L.A. excess – in life and their stage shows.  Their stories of debauchery have been documented well; the girls, glamour, destruction, booze, drugs, near-death experiences, and unlikely pairings are all written into the annals of rock history.  Their blond trinkets giggled loud and the traps of life snapped hard.  There was no middle ground for Crue, who believed in all or nothing – only a middle finger to those who disagreed.  The highs in life that came in so many flavors were countered by life-changing lows – things that would have destroyed many people.

And through it all, Motley Crue managed to stay alive long enough to reach their sixties (and beyond), and look back at a Life On The Strip that will likely never be repeated.

Such a band continues to garner fans that weren’t even alive in their most productive period.  That says a lot for the music they gave us and, to some degree, the life they led.  And while non-musicians like me can get our fix of Motley Crue by listening to their many albums, some skilled artists take it further – recreating not only the music we love but the entire Crue experience.

Lewd & Crued was created by Crue fans, for Crue fans!

Zhaun Dagley leads the band as the “Nikki Sixx,” while Chris Mowery is “Mick Mars.” David Clark is “Vince Neil,” and Kevin Hammond is “Tommy Lee.  Lewd & Crued also has a steady batch of dancers to back them up called The Nasty Habits – which includes Shannon Dagley, Lindsey Ferrari, Dani May Red, with guest appearances by other models and dancers depending on the show’s location and stage size.

Before their show at Emerald Downs on May 11th, I had a chance to sit down with the team – much larger than just the people who are on stage – and discuss their love for the music and why this means so much to them.

“Crue is timeless,” Chris said bluntly.  “There aren’t many bands from my youth that I listen to as often as I listen to Crue. And each time I’ll hear something different.  They’re an example of a band that stood the test of time.” 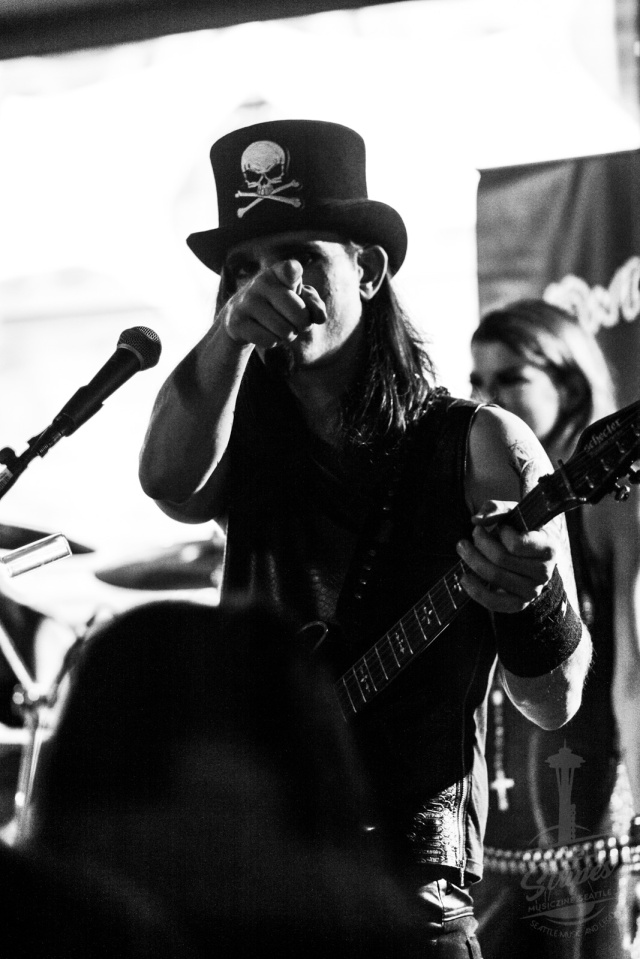 “With [the movie] The Dirt coming out,” Zhaun said, “It introduced Motley Crue’s music to a younger generation.  Their book is back on the Top 100 Sellers list, and records are selling well again – all because of the movie. They have some relevancy right now.”

Zhaun had always been a fan of Crue’s music when he was approached by a high school classmate to perform at an upcoming reunion about three years ago.  Her husband, David had been singing in Crue tribute bands for a while by then, so Zhaun and David got together with Chris to jam and practice.

“We had two months to put together a 90-minute set,” Zhaun explained. “Backup dancers, clothes, music, everything.”

“It was BRUTAL,” Chris added.

“We’ve seen videos from that night and it was pretty rough. But we got out there, and had fun doing it.”

And with Shannon dancing behind Zhaun on stage, performing became a family activity.

“It’s something that we can share,” she said. “It worked out great.  And I was actually placed there by accident.  Kicking and screaming.”

“Make sure you write that: Kicking And Screaming,” Shannon said laughing.  “I was originally taking care of things behind the scenes, and didn’t want a change.”  But she ended up having so much fun dancing and singing backup, that she came to appreciate the moments they spent together on stage instead.

As time went on they began to refine their music and their stage show.

Chris spoke to that point. “Anytime you play music, you HAVE to refine it. Sometimes ad nauseam. I still hear and practice little stuff I haven’t heard before in Crue’s music, or I’ll see a movement or a twitch that I can incorporate into the act.  It’s all about adding to the experience and making it more accurate.

But what I’m most grateful for it the steady work that Zhaun and Shannon put into this band. They’re constantly working to promote, book, or build, or add bells and whistles. Or develop merch even. It wouldn’t be the show it is today without their hard work.” 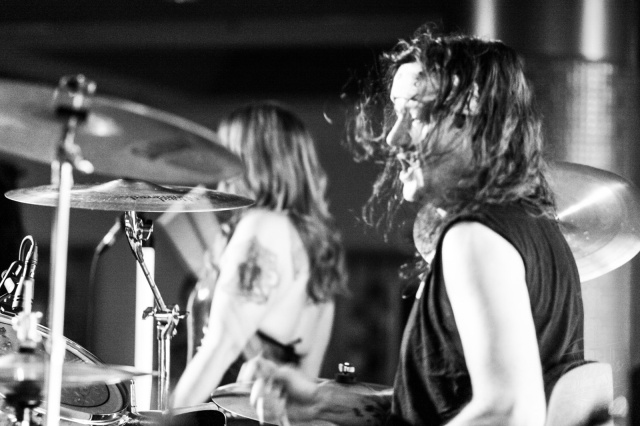 “The team is growing,” Zhaun added. “So now we can delegate some of the things Shannon and I were doing before.”

That dedication to the experience has paid off for Lewd & Crued because this year they are playing at Cruefest 2019 – on the same stage in LA’s Whisky A-Go-Go that Motley Crue played on in the early days.  Cruefest is a charity event that benefits cancer research – in the name Vince Neil’s daughter Skylar, who died of cancer at the age of four.  The event has been going on now for 18 years, and early on David Clark wanted to be involved.

“In the second Crue tribute I was in, we were set up to play at Cruefest in 2009. Our band at the time had four members and backup singers.  Since the Whiskey has a small stage, for that show we decided just to take the four guys down with no backup singers.  The drummer’s wife was a backup singer and got a little upset that she wasn’t able to travel with us.  Plus, their son was having a birthday the day after the show. So she gave the drummer an ultimatum: ‘If I can’t go, then I need you here.’ We had to cancel…one week before Cruefest.

So this year, we had this thing going and thought it would be great to go down and do Cruefest. and play on that stage where Motley Crue played back in the day – and where all those other musical artists got their start – Guns N Roses, The Doors, Led Zeppelin, Jimi Hendrix.”

“Anyone you can think of from 1962 to the present day,” David continued, “that played on that stage. And for me, it’s something I’ve wanted to do for as long as I can remember – to go to LA and play on that stage. So I just reached out to the guy who’s been doing it for 18 years – Nick Culves – and said ‘We want this gig, we need this gig, and we’re doing this gig.’ We sent him videos and information on what we’ve been able to do here, and the fact we’ve played a charity here already.  That went over well, because of Cruefest’s proceeds benefitting cancer research in the name of Skylar Neil. In the end, he chose us over a couple others that showed interest. I think he recognized that we had a lot of passion for what we do.” 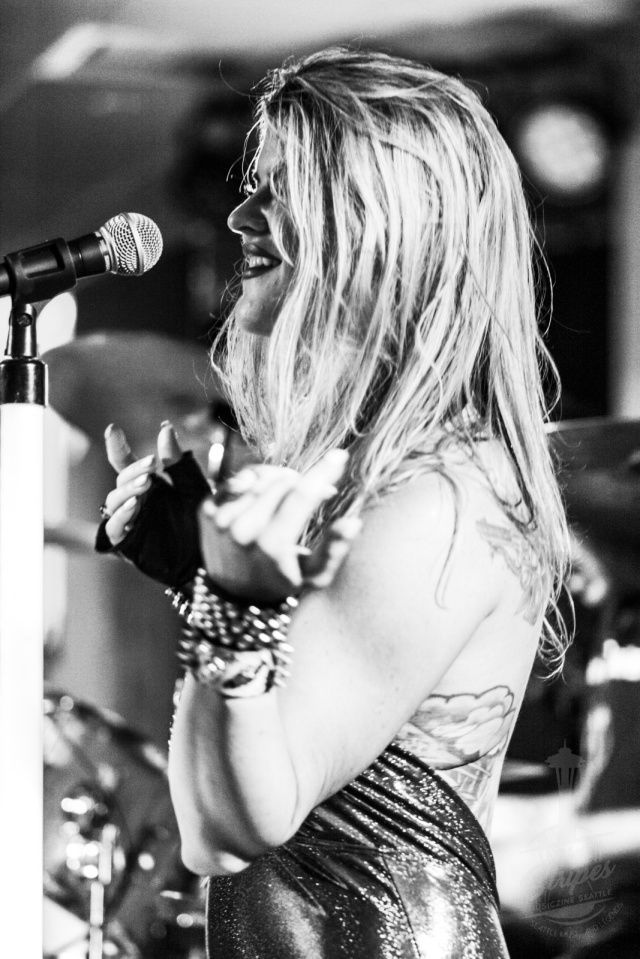 Zhaun knew all along that Cruefest would be a good fit for them.

“We do a lot of thinking outside the box when promoting ourselves. We’ve been pushing this thing pretty hard, and Nick finally said, ‘Yeah let’s do it.'”

Lewd & Crued will be playing Cruefest on July 27th this year.

I was with the band the entire night of May 11th at Emerald Downs and captured them before AND during the show.  It’s no simple feat to put on a tribute show; members walk off the street as regular people and have to get themselves ready and presentable as their chosen musicians.  Lewd & Crued does all their own work – from load in, to makeup, sound check, and break down.  It takes several hours of work to perform a one-hour music set!  One has to truly love the music being played to spend the sometimes thankless hours to bring honor to the music of their youth.  But for these folks, it’s worth it.

And their fans agree in a big way.

Lewd & Crued works hard to bring the entire Motley Crue experience to everyone.  Like the band they honor, their intention has been to give the fans something they’ve never seen.  It works.  Their shows are well-attended spectacles of light, movement, sound and sensuality.  Hard hits, fuzzy guitars and high-flying vocals are offset by silky smooth dancers.  Their May 11th show was billed with Second Sting – a local Scorpions tribute – and the entire night was a true barn burner. I added some photos below, from a Night In The Life Of Lewd & Crued!

Be sure to check out their Facebook page to see a show schedule and other shenanigans! 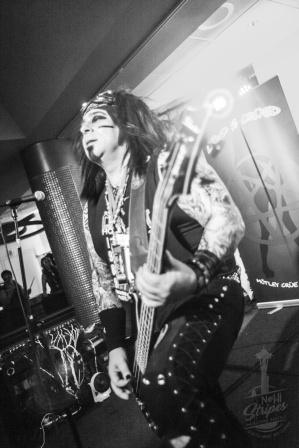 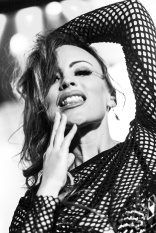 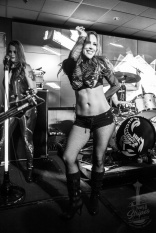 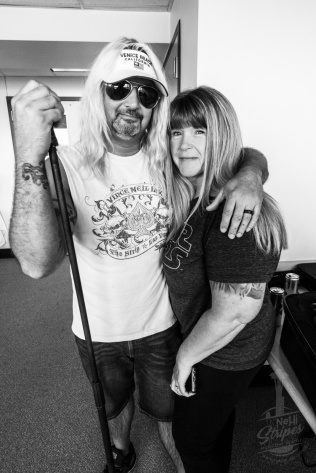 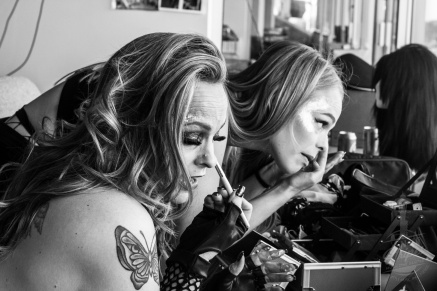 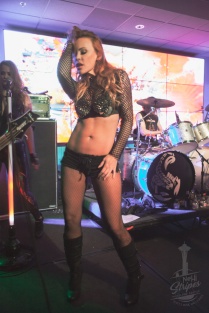