My sister told me that once she told Layne I was single he got nervous about calling me. She said she kept calling him a chicken and he would jokingly tell her to shut up.

So when he finally did call me he picked the absolute worst time. He was sicker than a dog with bronchitis. The poor guy couldn’t get one sentence out without having a major cough attack. I ended up telling him to call me back once he felt better. I heard he actually ended up going home for a week or two until he was better.

So after that, rather than calling each other, Layne and I started communicating through my sister most of the time. It was weird but me and Layne had this shy thing between us so that’s what we did.

One day my sister said Layne wanted me to come to The Music Bank to hang out. So I went. We sat in the office and just kept nervously looking at each other and making small talk as bands checked in and out in the office. My sister’s boyfriend, who also worked at The Music Bank, was there that night chatting with us in the office. When it got late I called a cab. Layne had a car but it wasn’t working or something. I can’t really remember what the deal was. Anyway, he followed me outside and waited with me for my cab. There was lots of tension in the air. The cab pulled up and I knew Layne was going to chicken out and not make a move so I went for it. I put his face in my hands and planted a big huge sloppy kiss on him before I got into the cab. 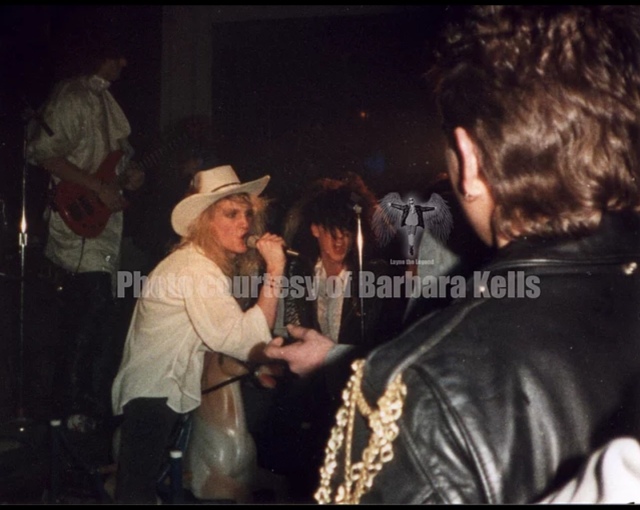 Later that night, my sister’s boyfriend called her and asked her what the heck I did to Layne. He said Layne walked back into The Music Bank office in a daze with a smirk and lipstick all over his face. Then he plopped down on the couch still in a daze without saying a word.

Hearing that made my night!

So for the next three months when I wasn’t at school (Community College) or work I was at The Music Bank.

Most of the time we would just hang out there and only we only left for shows and parties. I was at almost all of Sleze/Alice N Chains practices.

I remember laughing at Layne because he would smoke cigarettes and drink beer while singing. This was back in the days of most singers aspiring to sing like Geoff Tate (Queensryche). I didn’t think Layne was that great of a singer back then. I thought of him as more of a blonde Stephen Pearcy (the singer of Ratt) than a Geoff Tate type. Scott Hunt, co-owner of the Music Bank said he could totally see that as well.

When I wasn’t watching them practice, I would be sitting in the office with Layne and everyone watching TV. We watched The Cosby Show a lot.